Last week it seemed I spent every hour after work up in the paint barn. The paint barn is up the hill from the center of town. It’s on the outskirts, just before you take the road to Scott Base. It’s a good long walk, especially in the cold but once I was there it was nice and cozy. The ceiling is really low, everything has been painted in some way, it’s like a real studio. Anyways, I was working on a back drop for the Mid Winter Dinner. I had sent an e-mail to LouAnn offering to volanteer but I was worried about time. My free time is at such odd hours I was afraid I would be useless on a set-up commitee or a clean-up crew. LouAnn immediately e-mailed me a picture of a a blue lit forest with sparkly lights on all the trees. She asked me to paint a forest back drop. YESSSS! To put my skills to use! Not only that but I could do it on my own time. The hard part was getting the supplies I needed in order to be able to start painting. I wasn’t able to begin till Monday, the party was on Saturday. I was worried. I know about how long it takes me to paint a mural now, especially at that skill level. This was a simple enough plan. Unfortunately the low ceiling meant I had to paint it layed out on the floor. What a drag! I couldn’t visualize. I found a couple more inspiring pictures and tried to work off those but even though they had the same idea they values were completely opposite. I kept making half my painting one way and the rest of it another way till it totally clashed and made no sense.

From Monday till Friday I didn’t go to bed any earlier than 2:00. I’m glad I go into work at 11:00. Anyways, night time is my best time to paint. It was also really neat with the stillness. The only indication that it was night was the quiet of the station. It was incredibly warm that week. In the 20s. People had been running across in their T-Shirts. It was funny to hear Jason talk about the changes he has gone through. “I remember when it would be 22 outside (North Carolina) and I would be like,’F— No I’m not going outside it’s F—ing cold out there!’ and today I was outside in a T-shirt thinking,’It’s so nice out!’ What the F— am I thinking?!” Jason swears alot.

With the warm temperature came SNOW and lots of it. Oneday I took the road up to the paint barn and it was up to my shins the whole way. Too bad I didn’t know that before I went up in my anklet socks and slip-on shoes. I didn’t take many pictures that night. 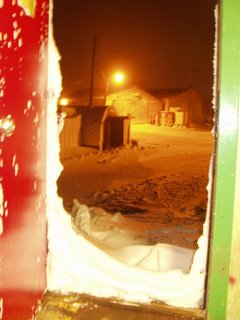 I have a series of photos that I took from one night that went over into the next morning. I have what I took as I left the paint barn. I had to get a picture of the doorway and the snow, my footsteps were already non existant. 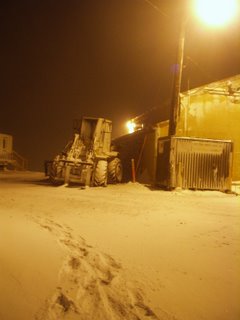 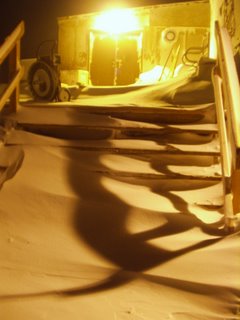 As I headed back down the hill I found other indications of the drifted snow. I loved the way the street lights made everything glow and the shadows that were cast. It was just so dark but so warm looking. 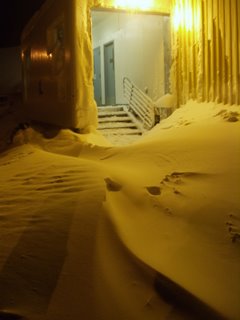 Part of my walk is broken up because I can veer off the road, go through 155 and come back outside about 100 feet from where I entered. This detour leads through the kitchen and usually involves a midnight snack. The baker now keeps a stash of cookie dough to appease the DAs and keep them away from her Wednesday prep supplies, every Wednesday is round cookie day. One night I came out to see the biggest drift yet. It was also when I realized that Jana would be tackling the task on her own the next day. I went to work the next day ready to help shovel. 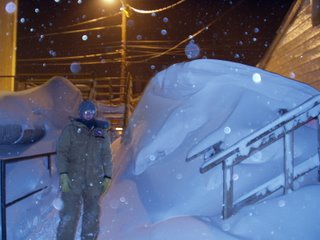 You see, after the warm weather and the huge amount of snow the wind came right behind and blew for about 2 days. It was just insane the drifts. We would shovel and an hour later you couldn’t even see the work you had done. There’s awesome drifts all over. Fleet Ops couldn’t keep up, they plowed the high priority places and everything else just piled up, it was awesome. The drifts would be soft for about a day but then the snow would settle and you would be walking over a lump of snow 2 or 3 feet high. Jason made the mistake of running up and pile driving himself into a snow drift that was over his head. He ricocheted off with an “oomph” and didn’t even leave a dent. 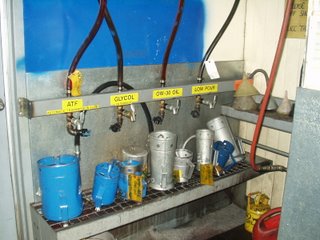 With all the warm weather we got to do some cold work as GAs. I finally got a peak at the gas station when we found a low tire on the van. 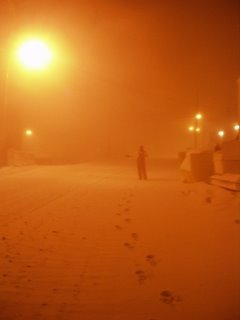 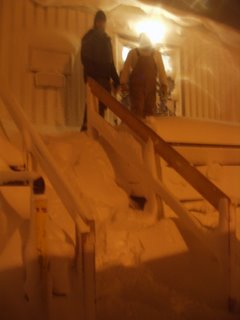 Steps were real fun to go down, at the library entrance we just skiied them. The only thing is that we were getting liquor out of storage and had to pass it off the dock instead of making our usual bucket brigade. The drifts prevented us using the stairs but they also gave us some height to make the dock more accessable. 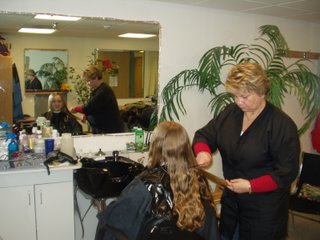 And finally, I was over due for a hair cut. I hate getting my hair cut but then I realized that Anita is paid by Raytheon so all that my trim cost me was a tip, I wouldn’t be getting a cheaper cut anywhere else. She did a great job too. I was determined not to think about it. I went during break so when my trim was complete I asked her to braid my hair again. I didn’t have to handle it for a good while, long enough for me to not realize I had lost any length and it was so wonderful to have someone else braid my hair again that it made the whole trauma worth it. Today is actually the first day that I have had my hair down and curly. It’s been weeks. I just never have the timing. We always have to have our hair back and covered in the Galley and on GA day you start off with an hour of shoveling and being outside, just long enough to have hat hair for the rest of the day.