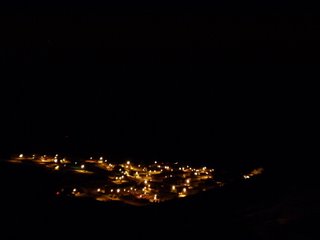 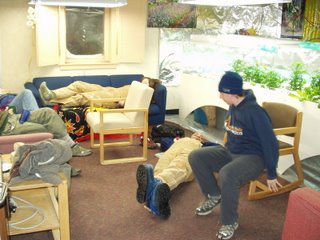 Good evening all, I am wracking my brain trying to think of all that happened this week. I think the main thing is that I am realizing that I am really not going to be here for very long, in fact, Mandi was telling me today that it is my 3 month anniversary from being down here and that it also marks my halfway point. Wow. I won’t even have enough time to go nutty but people are getting insomnia pretty bad right now. No worries here.

The first picture to explain is the increasingly popular light room. There is a hydroponic set-up where a number of plants are growing and thriving. I got a wiff of soil this week when Karen brought in a canister to wash out from the green house. It’s surprising the smells that aren’t around and how wonderful they are. There’s fountains running, some colorful wall hangings and soothing music. The room is right down the hall from the Galley, next to the radio station and we have begun going there for our breaks.

The weeks are keeping busy. My schedule keeps changing. Denver is where all the shots are made and they have decided to take the DAs out of the “high risk” jobs for 32 hrs a week. That would be pots and dish. Now we are hiring other people from other departments to help out at various times. 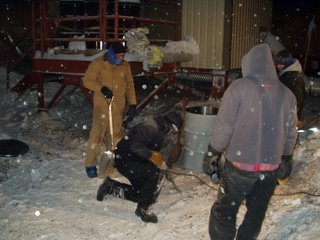 I really didn’t get any pictures again this week. There are about 4 parties happening tonight so it should be a little interesting. Yesterday for GA day we got to help waste clean up a spill. No spills allowed on the Antarctic soil. The sprinkler system in one of the buildings froze and burst because of the 90 below windchills that we have been having. We’ve had 3 days of Condition 2. One day the windchill actually got down to -100 but not long enough to declare it a Condition 1. The leak was stopped but it had already overflowed an oil and water seperator which dumped 15,000 gallons of water. We had to jack hammer underneath the shed to get out the contaminated frozen ice. That’s Safety Ryan working the jack hammer. He’s also working one night a week in the Galley.

That reminds me. I have been asking more about the way things work and I learned a couple new things. First, to keep the water pipes from freezing they all have an electrical heater strip called heat trace running along the outside of the pipe. The generators that run the place have glycol pumped through them which then pumped throughout the buildings to heat them. Did I tell you about glycol? How it’s the colder version of anitfreeze? They also run that through water pipes of buildings that they close in the winter. To keep the pipes from freezing. When I heard about the spill I also talked to the firefighters and they explained how there is a whole alarm system for spills set up as well so when the sprinkler system busted at 3 in the morning it lit up the panel at the firehouse, Zone 7 they told me. Then they alerted whoever was on call and it was taken care of. Something got missed since it continued to leak till 8:00 the following morning. 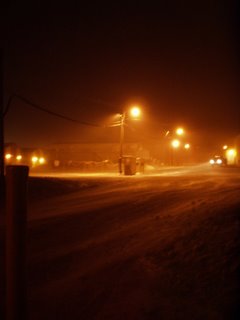 I have another Condition 2 picture for you. This is at 10:30 after my pinsetting night this week. Troy didn’t want to pinset so I took his place. It was nice to be back at it. I haven’t pinset for about 3 weeks I bet. 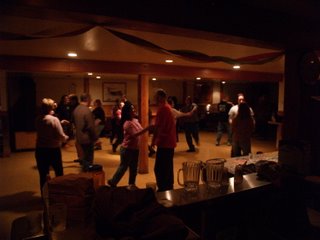 I missed out on the swing dancing classes on Sunday. Work. We did get to go to Castle Rock though. Did I tell you about that? I haven’t got many good pictures of that because of the dark but we sledded, hiked and acted totally goofy. I don’t know what happened but being out with the Galley Girls we were running and jumping around, going through every little kid game we could remember. There were “snow ball”fights with jagged chunks of snow. Jumping, hopping, I showed everyone how to do my brother’s muppet dance, Christina showed us how to run and then jump so that it looks like you were pulled backwards in mid-air. I think we were just being wild to keep warm. It was a beautiful night to be out.

I’ve worked on my scrapbook a little more, went climbing in the bouldering cave with Brian, finally cleaned and decorated my room (I’ll get pictures of that soon), I got a little more reading done, and I supported Christina on her first night as a Coffee House bartender. That was such a great night. I had just been all riled up setting pins as fast as I could, I had tip money in my pocket, I had my swishy skirt and striped pinsetters’ socks on, and I was ready to socialize. I had a cozy cup of cocao with peppermint schnapps and all my friends were just there hanging out as well.

Friday was a full day with our 6 am workout, the spill to shovel, skua to check out, Yoga and then Dodgeball to practice. I can’t get over how bad I am at Dodge Ball. Ugh. The best part was when we had quit and just ran around throwing balls at each other in a big free-for-all. It turned into the 2 boys against the 4 girls. Eventually the guys got tired out and sat on the floor while we practiced trying to hit them. They never had to move. I got the best smack of all from Jason. One of those, “Watch Out!” right on the side of my face, perfectly planted to sting like crazy, make my mouth numb but not cause any bleeding. Snapped my head back too. It was great, lots of concern from everybody but we kept playing. I think I eventually got Jason in the face. I think I got Eddie too. Oops. And the guys don’t throw nice for the girls, but at least the hard throws aren’t very accurate. Next week the A crew firefighters will be off duty and will be stirring things up.

I guess my problem is that I just feel real foggy right now, like I still haven’t woken up. I went to bed. . . well, not early but there was no partying going on. I think I need water. It’s all affecting my recollections of this week. Where are the little stories? I’ll have to get back to you. I guess I write in spurts.

See ya later. Tonight it’s Hillbilly night. Wish I had a corn cob pipe but my outfit will still be pretty good.