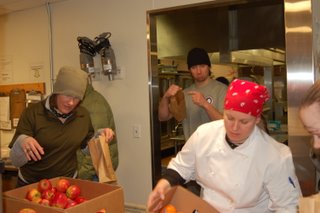 First of all, I am SO tired! What a day. I just got off work. It’s 8:30. I haven’t stayed this late since a couple weeks after I arrived. Now we stay this late not because we were overwhelmed but because it’s policy. Imagine wandering the kitchen for an hour trying to look busy after less than 5 hrs of sleep the night before.

It was intense today. There was a constant buzz about news. First there was a crazy trio that stayed up all night and were still hanging around the galley in the afternoon when I went to work. Then there was the news of the plane arriving. They had to see who won the wheels down bet. It was PHIL! YAY. Well, I would have been more excited if it was me but I am so glad Phil won. He’s just cool. Anyways, there were a couple differant wheels down bets and he won them both. That ticked off a couple sore losers. He’s made over $7,000 today just because the plane landed at 12:56.

After the buzz about the plane then it was when the new people arrived. Everyone only referred to them as “them” and “they”. “Have you seen them yet? ” “They’re in the hall, you should go look at them.” I heard a cheer outside the galley and went to look and there was the entrance turned into some sort of medivil fanfare. There was a row of galley girls on the top stairs with cameras snapping away at arrivals. There were people holding signs just like at the airports to find the new people that would be replacing them. For a while I was running around trying to capture everyone else capturing everything but then we just sat and watched sort of dumbfounded. It has been 6 months since we have seen an unfamiliar face. At first I thought everyone was some sort of dark ethnic background like Spanish or Italian. Brad thought they all looked grubby. We both came to the realization that it was tans.

After the arrivals there was a buzz about some poeple that got fired and put on the first flight out. There were only given a few hours notice to pack up and leave. We were all surprised. Winter overs were lurking in the halls waiting for the freshies as soon as people started arriving. Emily and I ran to the back dock to watch Ivan the Terra Bus come in. She took pictures then we both laughed hysterically about how crazy we must look.

While on the steps Angie came to tell us that Sally, our boss over Angie, had brought us all oranges, apples, and sushi. We all jumped up to run to the back and nearly trampled Sally. I mean, really, we nearly trampled her. Who could be so crazy about some food. The sad part though is that Mandi and Sandy weren’t there (day off) and we ate it all without thinking to save them any. I feel so bad. Sushi is all anyone talks about down here. I don’t understand why. I mean, it’s great and there’s no way we could ever have it but to crave it? Both Mandi and Sandy are here till October. We are out of here in 6 days.

It was break time when the freshies arrived. They are super important to get out of the cold, obviously. And require everyone’s pariticipation. When we were summoned away from break we knew what that meant and ran to the back dock. When I talk about running and dashing here and there I really mean it. There was no slow. We were like children. I thought of a town how it reacts when the circus comes through or some mountain village that has never had visitors. For the most part there was no new-new people. A lot were returning from the summer. There was no one to try to freak out. We’ll have to wait till Tuesday for the DAs.

Anyways, I was talking about Freshies. There was a meager little pallet of them. The pallet itself was actually huge but only a quarter of it was fruit. The rest was being handled by Supply. It was just such a cool community thing to see everyone surrounding 500 lbs of apples, bananas, and oranges. Angie also ordered one crate of STRAWBERRIES and a perk of being a DA we got to nibble a bunch. Then it was freshie time. Like a swarm the community came through the kitchen, properly covering their hair. Each person is given a paper lunch bag to fill with the fruits they desire – no more. I had a camera and recorded the delight on about 100 differant faces. I will try to get those up.

After the freshies and all the excitement I was completely wiped out. The night before had been an insane time at Southern celebrating the oncoming change. There was a pack of people, wild dancing, cheerleader cheers for the dart players, llama hand puppets, an in depth discussion on what “feeling up” means, some biting, and some radio contests that I have never heard about any where else. All I will say is I chose not to participate but the prize was up to $300.

All right. I have got to go. I will try to get some pictures up some time.