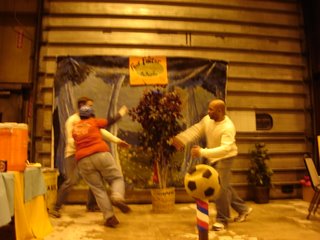 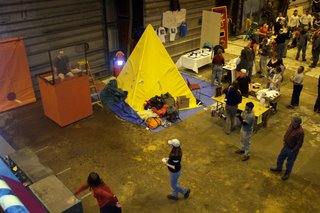 One thing about being inconsistant with my blogs I can’t remember what I have written about and what I need to catch up on. I think I am way way behind as far as events go – speaking of events, I found out that on our MidWinter Run it was actually -86 below and not the -70s number that I had first mentioned. Can you believe that?

Anyways, I’ll write about stuff here and there, as I can remember it, I suppose but I know that I need to write about 4th of July since my grandmother was curious how that all worked out. How do you celebrate 4th of July when you can’t go out and have a picnic? Well, that’s easy, you replace the park with a machine shop.

Nothing stops the 6 day work week here, so all holidays are rerouted to the weekend. I think Sanco De Mayo was on the 3rd of May, Midwinter was 3 days before the solstice, etc.

Anyways, the VMF: Vehicle Mechanic Facility or something like that, emptied out the shop of all it’s projects, set up booths, tables, and a stage and we had a regular carnival. There wasn’t a whole lot for booths, a booth was a volanteer doing all the set up and making all the prizes. Most people were interested in drinking and playing the games. I jumped at the chance to do some face painting but offered painless tattoos instead via sharpie marker. There was a tarot card tent, a coin toss, frisbee toss, spontaneous art, interactive computer racing game, a dunk tank (of course), my little box of paints and markers, and the Fear Factor McMurdo.

I had a mixed time. I didn’t get up and participate, didn’t get to watch the dunking, and sort of felt like I missed the whole experiance of attending a carnival but I was booked solid for tattoos. I had to make a waiting list to get to everyone. The highlight though was Fear Factor McMurdo. That was Troy’s baby. Him and his friends put it together it consisted of 3 events, first was 2 min. with your feet in ice water, second was drinking a nasty cup of wine, two-day-old-extra-strong coffee, guinness, cranberry juice, tobasco sauce, and maybe a few more things. Immediately after stomaching that you did one of those spin-really-fast-and-then-run-somewhere-while-you-are-timed(and laughed at) games. It was absolutely hilarious. Vanessa was the first to go, she’s the petite little dispatcher for the Firehouse. She had to touch her head to a padded pole that was little more than waist high and then run around it 10 times. After that it was a dash to a plastic tree that had flags hung throughout. She had to grab a flag and return it to a bucket, repeat the spinning and then grab another flag. All the guys were spotters and they had their evening full chasing around loopy people. A nice touch was climbing helmets that they were able to borrow from the BFC, it gave the game a look of peril.

Anyways, it was fun. I was working on this blog weeks ago and don’t remember where I was going with it. I am going to go eat.