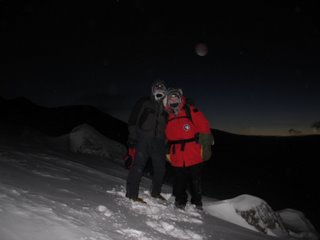 The brightest it gets, 1 pm 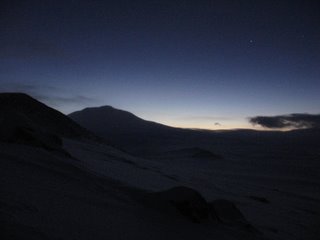 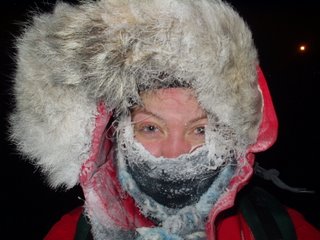 I had such a great day yesterday! Friday I began thinking that perhaps Sunday was going to be my extra day off. Everyone on “town hours” gets the first weekend off every months, Saturday and Sunday. To make it fair all DAs get an extra day off at sometime each month but of course not all on the same day. Mine is around the 28 th of every month and I am slowly beginning to figure that out.

So by Saturday I was beginning to scheme. Brian is on the SARS team (Search and Rescue) he’s an avid hiker and we had got to talking oneday about the trails and making them more of a challenge. Thinking of Skittles and his goal to complete all 3 long distance trails in the US, therefore earning the title of Triple Crowner, I thought I could have my mini Triple Crown down here. When I mentioned this idea to Brian he was actually willing to do it and he was actually willing to do it yesterday, Sunday.

We got up early and met for a 6:30 breakfast on our DAY OFF before heading out to the firehouse to sign out and get an extra radio. Dispatch had a forecast for us, it looked like it was going to be a decent day and we trudged off. I had been advised to pack 3 extra layers of clothing. I also brought my bunny boots because I wanted to try to hike in my work boots. I had really warm socks and boots are 600 Thinsulate, I thought I would be all right but better safe than sorry. We packed 3 liters of water and 3 sandwhiches each.

We went down the road to Hut Point, did some ridge walking on the Hut Point Trail, very windy and along a steep drop to the ice shelf. That trail met back up with the road to town and the piston bulley tracks that lead to the Castle Rock Loop. The beginning was harshly cold with that wind. I only had a thin layer of longjohns under my windpants. I thought my thighs were going to get frost bitten, they had never felt so strange.

It was such a surreal hike, to be hiking in darkness loaded down with extra warm gear, insulating our water bottles so they wouldn’t freeze as quickly. It was also strange to think what a wonderful hike it was, once we got past the ridge there was almost no wind it was so peaceful and calm. . . and 20 below. How can I be thinking that 20 below is NICE? Well, I thought it was great. It was a rare nice day amidst the weather we have been having.

Originally, we were going to climb Castle Rock. I figured climbing some big rock couldn’t be any worse than what I had done on the Trail. I was wrong. We made it around one scrambling corner with a steep drop to the bottom. I was feeling ok and asked Brian if this was the worst that it got. “Oh no, ” he said, “there’s a gulley to cross ahead”. Then we turned a corner and there was no more trail just a wall of snow covered rock along the same drop off. I thought the dark would at least blind me to the height but it gets sort of dusky around noon and I had no problem picking out my line of falling. I realized that I was lacking a few essential things for climbing. Besides lacking courage, I was also lacking any hand grip whatsoever. My mittens (MITTENS, that’s already bad enough) had frozen into duck bills, I couldn’t even pretend to hold onto anything. Brian let me stay where I was and scoped out the rest of the climb. It turns out that there were 2 more crazy-scary spots like this and safety rope that was supposed to help out was no where to be found. While I casually waited, wrapped against a wall, I thought of every potential possibility that would send me plummeting to my death. It didn’t really contribute to the possibility of making it to the top.

One thing with cold weather hiking was there was no long leasurely breaks. You stopped and rested till your hands went numb then you got up and started windmilling till you could feel your fingers again. Do any of you know this trick? It’s the coolest thing ever. The way your body works and maintains itself. When you have cold fingers, like numb, or painful or whatever, you spin your arms in windmill circles as fast as you can. You can actually feel the blood being forced to your finger tips. You look a little nutty but just after a couple of minutes it brings feeling back, without adding external warmth. Imagine that.

Another thing I was introduced to was frozen food. I hadn’t quite grasped the idea of leaving town with a normal lunch and then chewing on a block of ice later on. We had made it around the loop and were nearly back into town when we stopped for a late lunch. We used a building for shelter. I used my sandwhich to ring on a pipe.

Ob Hill was the big climax but it wasn’t a real big deal since I’ve been up there a few times already. I was just bugged that I hiked without my pack and still didn’t keep up with Brian. I think the craziest part of the day was probably the final descent down Ob Hill. I took a little detour thinking it was what I had done on previous hikes. It was actually really neat, drifts of untouched snow along a rock wall. I was just getting to the point of realizing that the trail was getting a little steep and I was running out of room to maneuvor when I heard Brian yelling down at me. It turns out that this was not the regular route down but “the Chute” which was more like a suicidal short cut. I wasn’t worried about it till Brian joined me and explained about the steep descent that got steeper at the end, turned to loose shale and ended at the road. Isn’t this some sort of movie plot where some dumb girl goes the wrong way and sends the whole group into a hazardous dilema? That’s how I felt, not only was I lagging behind but I had gone my own way (the wrong way) and was too chicken to get myself out of it without some tips from Brian. He showed me how to face up the hill and kick a hole into the snow for a foot hold and then step down the drift of snow like it was a ladder and kick in for some more footing. It actually worked and was really cool but I still felt like a total idiot all the way down. As I got to feel in control again he showed me how you can slide on your belly and kick both feet into the snow whenever you want to stop yourself. I didn’t do as well at that. I slid on my knees but found a few rocks that way.

Once we made it back into town (the entire trek only took 8 hrs) we had a great time telling stories. I had gotten a teeny tiny taste of what exploring Antarctica must have been like. I just can’t imagine not returning to a warm stable place at the end of a day. How did the exploration parties make it? How could they cope in those temperatures? Set up camp with mittens? Cook? Sleep? I had a hard enough time taking a photo every once in awhile.

The day was topped off with a soak in the hot tub – first time I have even seen that – and a massage. I gave a massage. Woo-hoo, 20 bucks. I even got frost nip for a souveniar. It was on my ear lobe, didn’t even notice it. That’s the thing about frost bite and frost nip, it usually takes someone else to spot it. When it was that minor I think it’s very sweet that someone else can be that observant. Just a couple days before the hike I had royally smashed my finger pinsetting. It sort of shifted some of my skin over. That’s when I wanted some attention and some sympathy. It was on my left hand so it was akward to clean it too. I must have been in some sort of mushy mood because I wanted to be fussed and cooed over. It didn’t happen, it was too late at night. I took care of the duck taped mess after pinsetting, I had taped it up as quickly as possible so I could continue working. I settled for whining to you guys about it instead.

Sunday ended with a lovely night of Princess Bride for the DA movie. I watched useless Buttercup in the Fire Swamp and thought again about my time going down the chute. Girls are dumb.